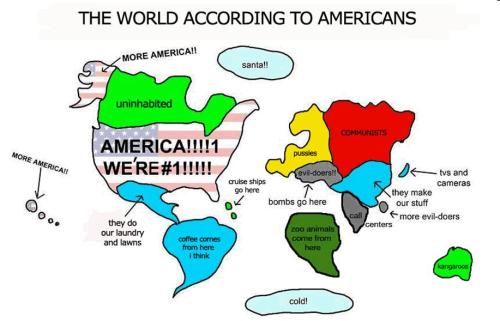 The World According to Americans

My friend Heidi posted this map to her Facebook page, and I realized that it’s unfortunately so true – particularly with American kids today. I am a huge supporter of public schools, but I believe that they are seriously lacking in teaching our kids about geography and the rest of our world.

I vowed that when I had kids I would never start a conversation with, “When I was your age…” and yet I do remember being taught geography in elementary school. We memorized the 50 states and their capitals, the Canadian provinces and their capitals, European countries and capitals, the rivers of Africa, the islands of Japan, and mountain ranges in South America. I can still remember most of them today, because I recite them in my head whenever I’m bored out of my mind at a long meeting.

Throughout California public elementary schools, the principal geography lesson is taught in the 4th grade on the missions and Native American tribes of the region. It has taken me decades just to remember the politically correct term “Native American” rather than the standard “Indian,” even though my nephew and two nieces are part of the Luiseño tribe from the Pechanga Indian Reservation (notice that people don’t call it “Pechanga Native American Reservation.” Go figure). I also have learned to not clarify “Indian” with “feather, not dot” while in the company of people I don’t know well and might interpret that I’m a racist, which I am not.

The 9-year olds at our local elementary school know all about the Luiseños and the San Gabriel Mission, but very few probably know that our state capital is Sacramento. If you ask them to point out California on a map of the United States, they probably can do it, but if they are offered to find it on a globe, I suspect that many of them would just be spinning it on its axis, looking for a dot that identifies the Luiseños.

The only reason our kids know the names of the states is from singing “50 Fifty United States” in chorus and “Boogie Woogie Bugle March” from Vaudeville. Thank God our parents raise funds for the arts, or the kids would be at a standstill after naming California and Florida. After all, Disney is the capital of those states, isn’t it?

There are states they might have heard of from other walks of life: Kentucky Fried Chicken, Jersey Shore, Hawaii Five-0, Texas hold ‘em, AriZona Tea, and of course California Pizza Kitchen. They probably don’t realize that Rhode Island is not actually an island, that West Virginia is actually northwest of Virginia, or that Washington State and Washington, D.C are not only not the same thing, but are on opposite ends of the country. If they had to pick out Hawaii from a map, they would likely choose the Channel Islands.

And that’s just the U.S. I’m absolutely certain that they have no idea that North and South Korea have a very different kind of boundary than the ones between the Dakotas and the Carolinas. They think anyone who’s first language is Spanish must be from Mexico and that Vietnamese, Japanese and Chinese are just dialects of the same language. They wouldn’t know that the North Pole is smack in the middle of an ocean, and that the Middle East and Midwest probably have absolutely nothing in common.

These days, children not only have no clear idea where American landmarks like Mount Rushmore or the Washington Monument are located, they probably have never heard of these landmarks in the first place. However, they can immediately tell you were to find Forever 21 in the mall, or the nearest Starbucks or McDonalds. They are also quite deft at navigating their Facebook page.

Now that my daughters are in middle and high school, they are thankfully learning more about world geography. My own geographical cockiness bit me in the butt recently when Mary Belle came home talking about the five oceans of the world. I corrected her.

“There are four oceans.”

I immediately spewed off the oceans: “Pacific, Atlantic, Indian and Arctic.”

I asked her about the fifth, but she couldn’t remember what it was and said it was near Antarctica. I figured she was just thinking of some fictional body of water from Atlantis.

My husband called me over to the computer. He had Wikipedia open to Ocean, and wouldn’t you know – there’s a fifth ocean called the Southern Ocean, which is “sometimes considered an extension of the Pacific, Atlantic and Indian Oceans which encircles Antarctica.”

Touché. I’d better start studying the globe a little better. And not the one that still shows USSR.

7 responses to “♫♪ Don’t Know Much About Geography ♫♪”