10 New Uses for an Old Emmy

The 63rd Primetime Emmy Awards takes place tonight at the Nokia Theatre in Hollywood, celebrating excellence in television. Between last week’s creative arts awards ceremony and tonight’s event, a total of 101 categories are honored (at least that’s what I was able to count on the Academy of Television Arts & Sciences website while my 5-year old was nagging me for milk).

An award may be won by a single person (as in “Outstanding Lead Actress In A Drama Series”) or by each member of a team (as in the 27 writers of Saturday Night Live in the “Outstanding Writing For A Variety, Music Or Comedy Series” category). By tonight, hundreds of entertainment professionals will have these sleek statuettes perched on their mantles, joining the ranks of thousands of others who have won in previous years.

For any of you living a Unibomber-like existence and are unfamiliar with the Emmy, it is a golden statuette of a woman on her tippy toes, leaning backwards and holding large spiraling ball. The ball is actually an atom, which should of course be impossibly too small to see, yet it is actually about ten times the size of her head. Emmy also has wings on her back. Not angelic wings, mind you. They are thin, pointy wings more reminiscent of Freddy Krueger’s razor-like fingers, and probably just as deadly.

It is an honor and a privilege to win an Emmy. But like your Little League, karate, or bowling trophies, what do you do with them after a year or two or a decade or more?

I actually have two Emmys for “Outstanding Sound Editing For A Series” as the dialogue editor for the long-running drama ER. I won them in 1995 and 1998, and then went on to edit The West Wing and Brothers & Sisters, which were not big winners in the category of sound editing. My old sound supervisor gets nominated every year, and has won so many awards I think he probably keeps one in his bathroom. Maybe another in his garage. There’s only so much room on a mantle.

Because our chimney came down in the 1994 Northridge earthquake, we don’t have a mantle to display my Emmys. Instead, the statues rest on top of a bookshelf which houses a variety of parenting, self-help, and spirituality books that I could really benefit from right now, but don’t have time to read.

As I’m in the process of clearing away clutter in my home, I began to wonder if after all these years, do my Emmys serve any functional purpose?

1. Gold prices are at a record high! Now’s the time to melt that statue and put some food on the table (of course this might be considered somewhat blasphemous).

2. If you lean up against those pointy wings, it makes a very handy back scratcher.

3. You can also use those pointy wings to clean the lint trap in your dryer. 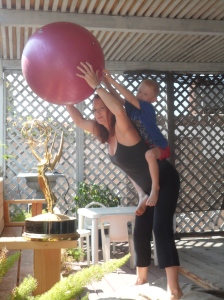 4. Use Miss Emmy as a model for stretching backwards with an exercise ball during your morning workout.

6. Brandish those pointy wings to scare away unwanted door-to-door solicitors or Jehovah’s Witnesses.

7. Those pointy wings are also useful for popping balloons after your 5-year old’s birthday party (which coincidentally I’ll be doing the night of the Emmys. Obviously the only red carpet I’ll be walking on is the one stained by cherry Koolaid).

8. The pointy wings are also great tools for cleaning fingernails, toenails and gunk between your teeth. However, they’re probably a little too dangerous for cleaning out ear wax. I’m not willing to try since one slip might jeopardize my career as a sound editor. And that would ruin my chance of a possible Charlie’s Angels trio of winged beauties.

9. If you’re a little short on cash, you can charge your friends and neighbors (or more likely – strangers) to hold your Emmy as you snap a photo with their Smartphone and let them post it on Facebook. Your customer’s friends probably won’t believe they were at the Emmys wearing cut offs and a tank top, but it’s Hollywood. It’s still more believable than what Lady Gaga wears on a daily basis.

10. Let your kids borrow your statuette when they play Barbies. Although Emmy is too wide to sit in Barbie’s Corvette, you can dress her up in Barbie’s ball gowns. If Ken’s off playing poker with his buddies, your Golden Girl and the blondie with the 36-18-33 body can race off for a discreet double date with Buzz and Woody. Note: Under no circumstances should you invite rowdy friends to the Emmy-Barbie play date! The afternoon is sure to end with a trip to the emergency ward.

Don’t be too discouraged if you happen to be one of the homes lacking the new, functional Emmy. Times are tough, even in the entertainment industry. After tonight, a statuette might be found on a craigslist near you.