Rainy Days and Too Much to Carry Always Get Me Down 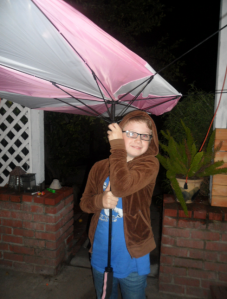 This morning I awoke to the sound of the sprinklers hitting the window way too early in the morning, only to realize that it was actually raining. I swear it was over 90 degrees only a couple of days ago. And because it rains so seldom in Los Angeles, it throws everyone into a tizzy – including myself. Yes, I heard the weather prediction, but I didn’t believe it.

So at 6:45 am I realized that my 5-year old is now three sizes too big for last spring’s rain boots, that he doesn’t own a waterproof hoodie, and that my windshield wipers merely smear, not wipe. I also discovered that every umbrella we own is broken. There were a variety of reactions from my kids about this piece of news. My rebel oldest daughter refused to take a broken umbrella, and I’m sure she was aiming to stand under a rain gutter just so she could wear her soaking wet clothes as a badge of honor. My 10-year old didn’t seem to care that the umbrellas were broken – she just wanted the prettiest one. And my son refused to take the girlie umbrella, even though that was the only one his size.

Today’s rain reminded me of an incident about ten years ago. Mary Belle was just a baby in an infant carrier, and Emily was about 4-1/2 years old. She had been diagnosed with type 1 diabetes the year before, and we carried a bag of syringes, insulin, glucose tabs, Glucagon, glucose meter, lancets, and strips everywhere we went. Fortunately Emily performs pack mule duty with her diabetes kit these days, but back then, it was a large bag, and I’m the one who carried it.

Anyway, we were headed to a birthday party at Chuck E. Cheese’s for one of Emily’s friends, and it was raining cats and dogs. Emily fell asleep on the way to the party, and when we arrived, I couldn’t wake her up (don’t worry – it wasn’t a diabetic coma… she was just taking a very hard nap).

It was a busy day at Chuck E. Cheese’s, so I parked at the far end of the parking lot. I picked up Emily and figured I could lay her down in the booth inside until she woke up. I scooped up Mary Belle in the infant carrier. Then the diabetes kit. The diaper bag. My purse. The birthday gift. And a bag of toys that were left at our house from the last playgroup that included the guests that were coming to Chuck E. Cheese’s. Then, balancing all these items with my arms, legs, elbows and knees, I struggled to open the umbrella and move everyone out of the car. I did a little twist with my hips and slammed the car door with my butt.

Unfortunately, I was physically incapable of straightening. I could feel the bags slipping. The umbrella caught a gust of wind and I lost it. I was suddenly caught in the downpour and the girls and I were completely drenched. Emily woke up. Mary Belle started wailing. The birthday present fell in a puddle along with the bags.

Just then, a friend of mine and her daughter approached. They were also going to the party. She asked, “Can I help you?”

And then I started to cry.

It was the first time as a mom that I realized that I really, truly needed help, that there was no physical way for me to do this on my own. My friend scooped up the bags, her daughter picked up the gift, and Emily was finally awake enough to walk on her own.

I blubbered all the way across the parking lot to Chuck E. Cheese’s. And I suddenly accepted the fact that it’s not so bad asking for help when you need it. I doubt my friend was keeping score, as in, “I helped Cathy in the rain so now she owes me big time,” which was one of my great fears about asking for help. She was just being kind. And by trying to do it all on my own, I was being stubborn. And foolish. And stupid.

I’m still not very good at asking for help, but I’m getting better.

I had originally thought of playing around with the song Rainy Days and Mondays Always Get Me Down and titling this week’s blog Rainy Days and sleeping-children-and babies-in-infant-carriers-and-diabetes-kits-and diaper-bags-and-purses-and-birthday-presents-and-a-bag-of-lost-and-found-toys-and-a-broken-umbrella Always Get Me Down, but it would have been just too dang long.

I believe if God was just a little bit smarter and kinder, he/she would instantly grow an additional arm for every mother of young children whenever it rains. That, and give her the humility to ask for help.