Celebrating My Vanity With My Vanity License Plates

I have a vanity plate. By definition, it sounds like a shiny serving dish that I often use to admire my beautiful face, but fortunately I’m not quite that self-obsessed. It’s actually a personalized license plate, so anyone who happens to be tailgating my 15-year old minivan will know it’s me and not some other broke mom who can’t afford a newer car. Here is my license plate:

For those of you familiar with me or my blog, you will instantly know that it’s a tribute to my children Jake and Mary. But others may be wondering, “What about Emily? Remember? Your first born? What is she? Chopped liver?”

Emily’s there too. See? 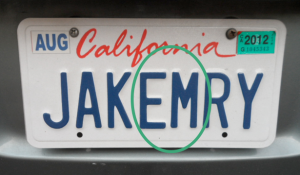 I typically call Emily “Em.” The only Em I’ve ever heard of is Auntie Em from The Wizard of Oz. Other than their names, there’s probably nothing my daughter has in common with the plain, elderly woman screaming “Dorothy! DOROTHEEEEE!” Except for maybe the screaming.

I ordered my current license plate about three years ago when Jake was a toddler and everyone was accusing me of ignoring my only son. My personalized plate at that time was this:

The definition of this plate was “Emily and Mary’s Mother.” However, you wouldn’t believe how often I’d be filling up at the gas station and someone would ask, “Are you really Eminem’s mom?” I was just a little hurt that someone would think I was old enough to be a the mother of a rapper that had been around for quite a while, but then Kim Basinger played his mom in 8 Mile, and although she’s nearly a decade older than I am, she certainly doesn’t look it. In actuality, Eminem is only 10 years younger than I am, and since I didn’t experience precocious puberty, I wasn’t a birth mother candidate. I often wondered if Eminem’s real mother might want to buy the plate from me, but I never got the call.

This was the vanity plate I owned before I had children: 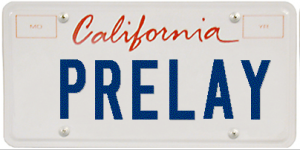 Prelay is the term used when an editor edits sound on tape (before that newfangled digital thang was invented). I would prepare sound effects and music that were on tape and lay them onto the multitrack tape so the mixer could dub them together. At least that’s how I think they got the term.

However, if anyone asked what Prelay meant, I would jokingly give this definition: “Dinner and a movie.”

Apparently, the folks in the vanity plate censorship department at the DMV thought the same thing, so when I applied for the plate, I had to give a definition of Prelay. I did not tell them it meant dinner and a movie.  If that was the case, I probably would have been driving around with a plate that had seven random letters and numbers instead of something that made me look easy.

Naturally it was wise for me to change my dinner and a movie plate to something more G or at least PG rated. Otherwise, whenever my car would be covered in dust, instead of hooligans scribbling “Wash Me!” they would have written “Tramp.”

I ordered my first personalized plate when I was just 16 years old, and with my minimum wage ($2.65/hour) job at Kentucky Fried Chicken I bought a 1973 Mercury Capri for $950.My vanity plate read:

It stood for “Cathy’s Capri.” The car was a stick shift, which I thought was cool, although I had no idea how to drive a stick so I always grinded the gears. It also had Bondo covering its tail end, which didn’t bother me so much since I wasn’t the one who had to look at it. I was a total dweeb, and if there was any question about that, people could just look at my lame personalized plate to be convinced that there was no doubt.

I love sitting behind cars and trying to figure out their personalized license plates. I have seen many variations with HOT or SEXY or BEST. Isn’t it great that drivers have such great self-esteem? I’ve never seen a LOSER or STUPID or IM*UGLY, even though they fall into the required seven letters or less category.

It would probably not be a good idea to order the plates SPEEDER or DRUNK or COPSUCK. Even if you obeyed all the traffic laws, I suspect you’d be spending lots of time in traffic court for minor infractions like “contemplating a rolling stop” or “looking down at a breakfast burrito.”

I always wonder what happens to couples who are going through an ugly divorce but own personalized plates that have their initials, followed by a heart and then their spouse’s initials. Are they level-headed enough to order a new license plate right away, or do they cry and want to scratch out the last three letters every time they see their cheating scum-of-the-earth’s initials?

(Don’t worry, Sweetie. If you’re reading this I don’t mean us. I was just using this as an example)

For the time being, my children are quite well behaved. But if you happen to be driving behind me and see the first four letters of my vanity license plate scratched out with a jackknife, you can guess that Jake has probably been sent off to military school.

19 responses to “Celebrating My Vanity With My Vanity License Plates”