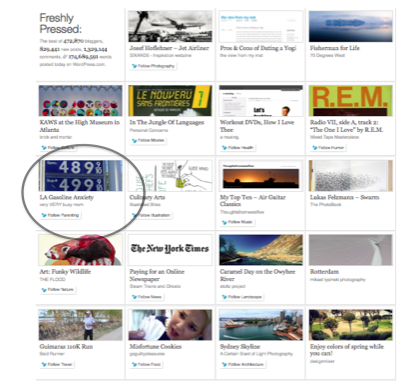 Imagine opening up your email and instead of just the standard Groupons, spammers, and loads of subjects starting with “Re:” (even though you were sick of reading the original email the first time around), you – Joe Shmoe – see page after page of:

[Joe Shmoe] everybody likes you…

[Joe Shmoe] everybody is commenting about you you YOU…

This exact thing happened to me last Friday. Well, the exact same thing except that instead of “Joe Shmoe” it was for my blog very VERY busy mom. And of course it didn’t actually say “everybody.” I just said that to provide myself a little ego boost.

But I kid you not. I was getting a new email practically every minute.

Apparently a post I wrote last month about obsessing over the high price of gas entitled “($ ÷ Gallon) x (Miles ÷ Gallon) = LA Gasoline Anxiety” was featured on WordPress.com’s Freshly Pressed, a Webpage that offers between 11 and 19 picks of the day chosen from their nearly half a million bloggers.

Typically I’ll get 80 to 160 hits when I post a new blog, and then it’ll dwindle down to about 20 to 50 hits until I post another new one the next week.

But after appearing on Freshly Pressed’s hit list, I had an astounding 1757 hits!

I don’t even know 1757 people. Even virtual people. 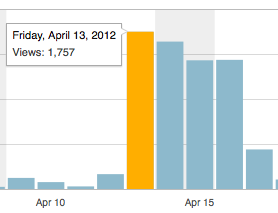 I received 181 comments on that article alone, mostly from people reprimanding me for driving my pokey 5-year old son 1300 feet to school in the morning. I guess you can’t explain the humiliation of a tardy slip to people who want to save the planet from greenhouse gases. 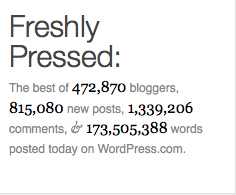 I must have logged onto my blog a hundred times between Friday and Monday just to watch my hits graph move up. And to answer the obvious question… no, it wasn’t just me visiting my own site 1757, 1647, 1438, and 1443 times in four days. WordPress actually counts unique visitor per day. And if I am anything, I am certainly unique.

So, to celebrate my good fortune, I now present:

1. I can wear a sash in the Valley Village 4th of July Parade that says “Miss Freshly Pressed.” Or maybe not, since I hate ironing.

2. I’ll have virtual conversations with well-known bloggers, and they still won’t know or care who the heck I am, but I have the opportunity to feel smug anyway.

3. I’m finally getting more regular comments from people besides my mom and my husband.

4. I get to experience what it’s like to have 5 minutes of fame without claiming to be impregnated by a pop star.

5. Because I now have more Twitter followers, I’d better start posting more newsworthy tweets than “Another Wednesday. Another Humpday.”

6. I now have readers in countries I not only have never heard of, I also can’t pronounce their names. (Libyan Arab Jamahiriya… anyone?)

7. My Klout score has risen to an impressive 46! I still don’t really know what a Klout score is, or if 46 really is impressive, but it sounds good, and most of my readers probably don’t know the difference.

8. I can brag that both Indians (Native Americans) and Indians (from Asia) read my blog, except at opposite times of the day.

9. I now know a lot of people in Europe who want to move to LA for the cheap gas.

10. I have to figure out who at Freshly Pressed I need to bribe to get featured again. This has been fun!