I got the call three weeks ago that one of my best friends of the last 15 years had died. She had been in an accident, and her injuries were just too severe to save her. Personally, I don’t think they tried very hard. I know it’s because of her age. When you’re old, you’re expendable. I disagree. I think she still had a lot of good years left in her.

My kids hung out with her every day, and all their friends knew her well. My companion and I spent an insane amount of time together and we never tired of each other. She was attractive, yet low-maintenance. She was dependable. And until her tragic, untimely death, I knew I could always count on her.

She was my 1998 Toyota Sienna XLE Minivan.

On Friday the 13th of April I was trying to parallel park on a residential street two blocks from my home when another car struck the front of my car and sped away. The collision tore the front bumper completely off my minivan and broke the axel. Still, the damage looked repairable, so it was a real shock when the auto body shop told me it a total loss.

When I got the news, I just started sobbing, and I’ve been continuously crying ever since. This was the car that I was going to pass on to my daughter Emily when she starts driving this summer. However, I already knew that I was going to be an Indian giver. I loved my Toyota Sienna XLE and even though she was already 15 years old, I wanted to keep her a little longer.

Toyota came out with the Sienna as a minivan substitute for the discontinued Previa. We bought one of the first off the assembly line in the summer of 1997. It had a sliding sunroof, leather interior, dual air conditioning, power windows, radio/cassette/CD and a power driver’s seat. Coming directly from a Mustang convertible, it was nice to step into the lap of luxury rather than some sticky, soiled kidmobile.

I eventually got a couple of dings on my minivan, but by that time the car was so old that didn’t bother me much. There was a scrape along the passenger side from a Trader Joe’s shopping cart, and the paint was starting to fade from the repair done in 2004 from the time I was backing out of a parking spot at Warner Bros. and didn’t see a pole in my blind spot. But the engine was pristine. I performed regular tune ups and oil changes, and in 15 years there was not one single engine breakdown or malfunction. Remember when I mentioned that she was dependable? I would be hard pressed to find any human as trustworthy as my Sienna.

Jake loved to have the sun roof open. Emily enjoyed sitting in the front seat and propping her boots on the dash. Mary – always the social butterfly – would have a carload of her friends coming home with her, their heavy backpacks piled in the back. It was roomy enough to transport the whole family plus my mother-in-law to the Inland Empire for holidays with my family. It felt like first class seating in an airplane, and my Sienna probably got us there faster than flight + check in time.

Since all the back seats were removable, I have probably helped move 30 people into new homes, and loaned my car out as a free U-Haul to a wide variety of friends. I had just purchased custom leatherette seat covers to hide the rips and cracked upholstery on the driver’s seat, and only the day before the accident the odometer clicked past the milestone 150,000 miles. My Sienna should certainly have been placed alongside the Energizer Bunny and the Timex watch as a product that takes a licking and keeps on ticking.

I loved this car the way many people love their animals. I’ll probably get some nasty comments by saying that, but it’s true. Granted, it was a one-sided love, because it’s not like a car can love you back. But it’s certainly better than most one-sided relationships where your love is not reciprocated. At least my object of love made me exceedingly happy.

A week after the accident, I turned over my keys, signed away my rights, and cleared my belongings out my minivan. It felt like I was packing up keepsakes after a death, yet the death seemed like my own. Emily was diagnosed with type 1 diabetes in 1999, and I found old stashes of glucose tabs, blood testing strips, glucagon and insulin that had expired years ago. Finding all those supplies brought back the flood of fear that engulfed me when Emily received the diagnosis just two weeks after her 3rd birthday. We had to keep emergency supplies with us wherever we went, and those first few years we’d grab them from the glove compartment. Now Emily carries diabetic supplies herself. I never thought there’d be a day when I wouldn’t obsess about her disease, yet at some point it happened.

I cleared out CDs I hadn’t heard in years – Steve Winwood, Phil Collins and the recently departed Whitney Houston. These CDs had long since taken a back burner to NPR and iTunes while I was driving solo, Adele when Mary was with me, and everything from David Bowie to Ozzy Osborne to My Chemical Romance to the soundtrack to the musical Spring Awakening for my daughter Emily.

The seat pockets held headshots and resumes of my daughters from their commercial auditions stint years ago; about 50 Bed Bath & Beyond coupons (they take expired coupons if you didn’t know); baby wipes that were bone dry; my daughters’ ID cards and fingerprints that were issued back in 2003; makeup that had solidified, faded, or otherwise been rendered unusable; and bandaids and sunblock in a variety of car cubbies. Despite my LASIK surgery last summer, I found two pairs glasses and contact solution that expired in 2002.

By now the vehicle is probably being dismantled and sold as used parts for other 1998 Toyota Sienna XLE owners who want to keep their trusty friends around just a little bit longer. I can’t blame them. That’s what I would have done if I had a choice.

As a tribute to my dearly departed friend, here are some of the posts I wrote on Very VERY Busy Mom that featured my beloved minivan.  Please join me on a trip down Memory Lane:

There is Nothing Sexy about Washing My Filthy Minivan 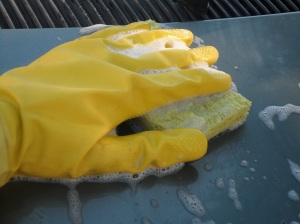 Celebrating My Vanity With My Vanity License Plates 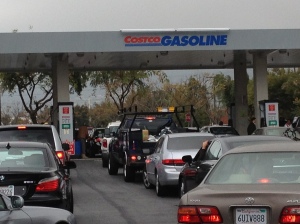 Road Trip with Kids – 40 Years Ago and Today 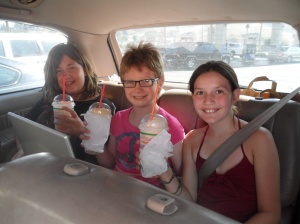 That New Car Smell Has Left My Minivan