Happy Birthday to My Irish Twin 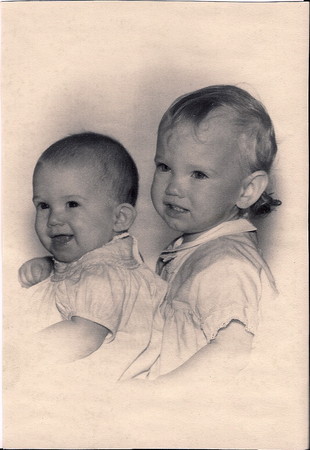 I named my blog Very VERY Busy Mom because I try to get more done than humanly possibly, and yet there’s one person who makes me look like a slacker – my sister Tammie.

Today is Tammie’s 49th birthday. I am also 49. We will both be 49 years until September 13 when I cross over to the mega-milestone of 50.

Just like the previous 49 years of our lives, we are the same age for exactly one month. We are called “Irish twins” – siblings born within 12 months of each other. And like some real twins, we have our own language that no one else understands. Actually it’s just English, but we since we constantly finish each other’s sentences, it may seem like some other rude language that focused on interrupting. To us, it’s a closeness that can beat any team in a game of Taboo.

We were too close in age for Tammie to wear my hand-me-downs. Instead, my mom dressed us like twins in identical outfits. Mine was blue and Tammie’s was always red, as if people needed help telling us apart. We didn’t. I was a blue-eyed blonde. Tammie was a brunette with brown eyes. She always had a golden tan, while I suffered through an endless cycle of burn-blister-peel.

In elementary school I was the butt-kissing teacher’s pet. The next year, Tammie would get the same teacher. “Why can’t you be more like your sister?” they each would gripe. I was a tough act to follow and she didn’t even try to compete. I stressed out memorizing multiplication tables and studying for spelling tests. Tammie was perfectly happy with her B’s and C’s.

I was bossy and overly sensitive, while Tammie could care less what people thought of her. She wasn’t a jerk or anything – she just didn’t spend the time focusing on herself. This quality made her fun to be with, while I ran around with a stick up my butt.

Throughout high school, Tammie and I shared a bedroom, which was actually a small converted den with a coat closet. We also co-slept each night in the same double bed. The setting was a little too close for comfort and we did not get along. At all. Tammie thought I was hogging too much of our small closet (I was) so one morning on trash day she threw out all my platform shoes. I hated her at the time, but looking back, I can’t blame her. Who did I think I was? Imelda Marcos?

In 1983 we both got married. It wasn’t a Brady Brides double wedding, but we were each other’s bridesmaids. My fruitless marriage lasted a year and a week. Tammie made it to seven years, producing a new baby every other year.

Tammie & me camping at the beach last June.

Our adult lives have continued to weave back and forth through lack and abundance, good luck and misfortune. I sped through college and grad school and landed a successful career in the entertainment industry, working so many hours I virtually lost an entire decade. Tammie struggled to single-handedly raise her three children with the help of welfare and food stamps. She cleaned houses, took in childcare, and frequently went without utilities or a car or the rent money.

I had money and no time. Tammie had time and no money. I mailed her kids gifts and stuffed animals, not realizing what my sister really could have used was a nice visit, and maybe a little help with the laundry.

I remarried. Tammie had a short-lived relationship that bore her another daughter in 1995. I gave birth to Emily the next year. And just like the two of us, our daughters – who are only one grade apart – could not be more different. Lauren works at Hollister and dreams of being a Kardashian. Emily shops at thrift stores and loses sleep over the water crisis in Mexico.

By the millennium, the entertainment industry starting reigning in my long hours and Tammie began working double shifts job as a psychiatric technician for the criminally insane. I got my time back just as Tammie was losing hers.

We each gained new husbands within a year, and we describe them both as “low maintenance.” My son was born ten months after Tammie’s granddaughter, and Chloe’s now the bossy one and it’s Jake who could care less.

We both returned to school recently. Tammie earned a degree in Education and I got mine in Library Science. We share stories with each other about juggling work, school, children, housework, volunteering, gardening and husbands who just shake their heads when they hear us say “yes” to yet another thing.

Now that we’re both pushing 50, it’s kind of fun being just 11 months apart to the day. Tammie can tease me that I’ll always be older, and I can remind her that she’s not far behind. We talk on the phone every other day or more.

Today, my Irish twin lives 70 miles away from me so we only get together about a dozen times each year. And although I don’t want to go back to sharing a double bed and a coat closet, I fantasize that one day we’ll roommates in a nursing home, sharing the age of 95 for a single month, and beating the other old ladies in a game of Taboo.

16 responses to “Happy Birthday to My Irish Twin”