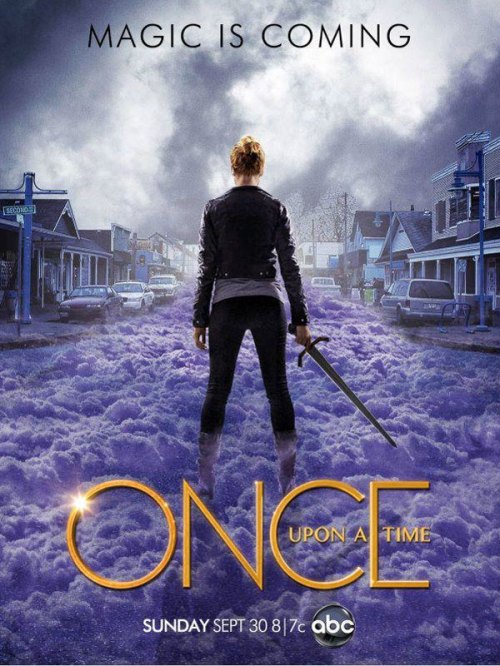 Just as the 7 Dwarfs have returned to their menial labor mining precious fairy dust, my factory job as the dialogue editor for the ABC drama Once Upon a Time resumed this week. It’s been a long 4-month hiatus, and although I’ve enjoyed being a full-time unemployed mom to my two little beauties and the beast (their roles interchange depending on the day and the deed), I’m anxious to put on my big girl underpants again and start earning a regular paycheck.

I’m also excited to find out what has become of Storybrooke now that the Evil Queen’s spell is broken. After 22 episodes of the present day townspeople forgetting that they are actually fairy tale characters, last spring’s finale led us to believe that they have suddenly remembered. Will it be like the Dallas cliffhanger in the late 1980’s when poster girl Victoria Principal woke up and found that the previous season was just a dream? Will the show steal the standard soap opera formula in which a character suddenly has amnesia – but in reverse?

Last May when the first season ended, I wrote a blog post entitled “20 Predictions for Season 2 of Once Upon a Time.” I edit the show’s dialogue (sound), not dialogue (script), and my work is the second to last creative step before the show airs, so I was not made privy to any second season storylines.  As a humor blogger, I tried to make these prophecies ridiculously unbelievable and included tidbits like:

“Present Day Snow White, Belle, and Cinderella nearly kill each other in a catfight when they are all featured as contestants in Storybrooke’s version of The Bachelor.”

Even though this post was written nearly four months ago, every week I’ve been getting progressively more and more hits. Very VERY Busy Mom is just a simple humor blog with only 269 followers (most of whom are probably friends and family I had to strong-arm), yet I have had nearly 2,000 views of this post. Everyone seems to be Googling to find out what will happen to Snow White, Prince Charming, the Evil Queen, Rumplestiltskin, and their counterparts in present day Storybrooke. I wonder if fans are disappointed when their search engine ends up with my little fluff piece. I also wonder if any of those fans are dim enough to believe that my predictions came from the horse’s mouth. Could they truly be that dense? Would they really believe:

“Leroy (Grumpy) and perpetually-pleasant Sister Astrid (Nova the Fairy) get married and have a slew of bi-polar children.”

Naw. Those would be the viewers who prefer reality shows and turn Snookies into celebrities.

I am a huge fan of Once Upon a Time, so I too have been waiting on pins and needles to see what will happen in the Season 2 opener. And since I actually work on the show, I get to find out about a month before you do.

Unfortunately I can’t tell you because then I’d have to kill you. Maybe. On the other hand, Once Upon a Time is owned by Disney-ABC, so the Mouse Mafia might actually hunt me down and revoke my Disney Lot walk on pass.

If you believe the previous sentence, you are exactly the dim person I was just talking about.

If I did spill the beans in my blog, or frankly anywhere, I’d probably lose my job. I didn’t have to sign a disclaimer or anything, but I would think it’s both a common courtesy as well as proper business protocol to not be blabbing a television secret, even if it is only to my 269 followers and 2,000 other mystery readers, which would be a far cry from the millions of viewers Once Upon a Time attracts.

I’ve spent the last 18 years working on some truly amazing shows that were both popular and critically acclaimed, primarily ER, The West Wing, and Brothers & Sisters. They were all episodic dramas with continuous storylines, but none of them fueled the intense curiosity of what was going to happen next the way Once Upon a Time does. No one ever came up to me at my child’s Monday morning school assembly begging for a sneak peek into what would happen next week:

“Who’s getting admitted to County General next week? I hope it’s a cool disease! And when’s George Clooney coming back to ER?”

“What will President Bartlet’s next speech be about? What big words will he use? Watching The West Wing is the only way I expand my vocabulary.”

“Is Tommy coming back to Brothers & Sisters or is he away getting acting lessons?”

None of these conversations ever took place. But I must have over 200 people (or possibly every one of my 269 followers) ask me for clues about Once Upon a Time every single week.

You’ll just have to wait until the Once Upon a Time premiere on Sunday, September 30th to find out (8:00 pm PST on ABC).

Tagged as ABC, anticipation, cliffhanger, Disney, finale, Once Upon a Time, season 2, secret