Missing the Kodak Moment on the First Day of School

I am a terrible mother.

Today was the first day of the 2012-2013 school year. I dropped off Mary at the middle school gate, walked Jake to our local elementary school and into his new class, and since Emily is in high school I just gave her a firm kick out the front door. After my kids were tightly locked down into their three respective LA Unified schools, I came home, poured myself another cup of coffee and posted the following to my Facebook page:

“It feels so weird to have the house to myself.”

I hit “post” and then proceeded to read my friends’ News Feed for the morning.

That’s when I realized I deserved the Worst Mother of the Year Award.

Every single post of every single parent of a school-aged child had already uploaded a photo of their little angel’s first day of school. The kiddos were carrying Angry Bird lunch boxes and had Dora the Explorer backpacks over their shoulder blades and their spotless shoes were glittering and their shiny outfits were so new the tags were probably pulled off on the way to class. They were posing with old friends and new teachers, clutching siblings, and wiping the tears away from their sobbing parents.

I, on the other hand, had completely forgotten about that precious Kodak moment. And now it was too late.

It’s not like I could barge into my 16-year old’s French III class with my iPhone blazing. “Excusez-moi, Madam,” I could have said, and that would be the end of it since I don’t speak French. Then I’d take a quick snapshot of my daughter hiding under her desk. For the rest of her high school career, she would be known as That girl with the crazy paparazzi mom.

I wouldn’t have been allowed to sneak into my 11-year old’s drama production class and loudly proclaim to her teacher that being the thespian that he is, he should understand why I must stop the class in their tracks from learning a Shakespeare sonnet or a David Mamet play or some improv demonstration where they all pretend to be caterpillars just so my daughter can be seen on the big screen (big depending on how large your computer monitor is). Normally I humiliate her just by breathing. This stunt would have pushed her so far over the edge that she probably have come home and tried to OD on gummy vitamins.

And now that my baby boy is a big 1st grader, he’d be completely mortified if I popped into his new class and interrupted a lively reading of Junie B. Jones.

“Stand over here next to Hendrix and say ‘cheese!’”

Then I’d reposition him and shove another of his soon-to-be-former friends into the group.

“Let’s do another one with Charlotte since you weren’t smiling.”

Then he’d excuse himself to go to the little boys’ room and never come back.

I could have had my first day of school Facebook photos. But alas, I missed my moment.

So here’s my re-creation: 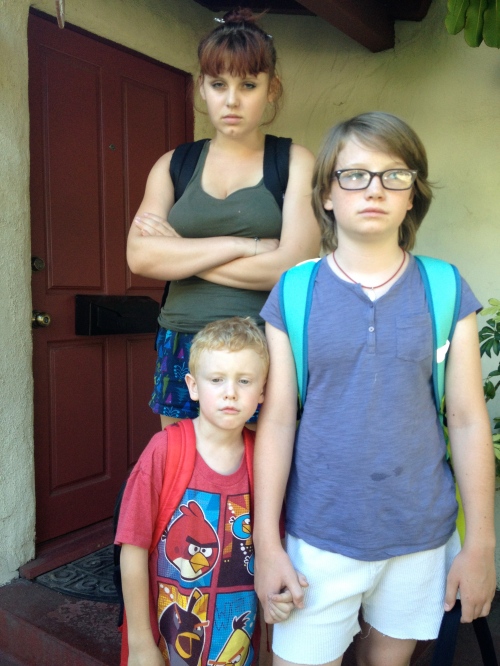 I took it after my kids got home. Notice that Emily and Mary are already wearing their pajama bottoms.

It’s too late to capture that first day of school moment. But at least I still have time to embarrass my kids.