Too Much Poop in the Pipes 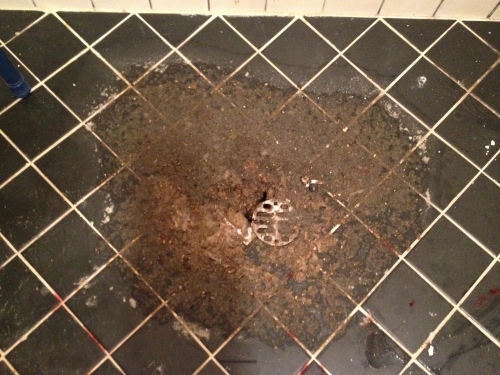 What goes down... must come up?

In today’s tough economic times I am lucky to experience pride of ownership, but there are days when I wish I could just call the super to fix the broken (fill in the blank) without pulling out my checkbook.

The latest fill-in-the-blank started about a month ago when I noticed remnants of the garbage disposal drain regurgitating into the adjoining kitchen sink. I assumed that my husband was forcing large pieces of vegetables down the drain rather than discarding them into the green bin. I wanted to call him lazy for not taking the 30 foot walk outside, but I really like it when he cooks, so I figured I’d keep my big eco-friendly mouth shut.

A few days later, the bathroom toilet started clogging so often that the plunger made itself a permanent home next to the royal throne. I blamed it on my son Jake who refuses to eat anything except hot dogs and chicken nuggets. I know he’s only 5 years old and I am the mommy, but I have to pick and choose my battles, and forcing him to eat his dinner vegetables is the battle he seems to be winning. At least he does his homework without a fight.

Then the tub began to clog on a regular basis, and I feared that there was a pussy cat-sized ball of hair clogging the pipe. I would love to have blamed that blockage on one of my daughters, but Mary still has her boy-length hairstyle, and although like me, Emily dyes her hair red, I suspect that the hairball was made up of long red hair with two-inch gray roots.

The final straw came last Monday when I started hearing gurgling sounds in the bathroom. The bubbling was coming from the toilet, and although it sounded like a 5-gallon Sparkletts bottle dispensing H2O, somehow I just knew that whatever liquid was making that sound was not going to be especially pure and fresh. A few seconds later the toilet flushed itself – or rather the water shot down and disappeared into the tank for a moment, then reappeared as murky grey muck. It reminded me of the redneck singing the The Beverly Hillbillies main title theme:

And up through the ground came a bubblin’ crude.

I suspected that unlike Jed Clampett, I wasn’t about to become a millionaire, although it might be likely that this bubblin’ crude was going to cost a million dollars to fix.

That’s the moment that I should have heeded the kinfolk’s advice when they told ol’ Jed to “move away from there,” because that crude-colored feculence nearly spilled right over the toilet rim.

I started screaming for my husband, because that’s what we delicate women do when a river of excrement is about to pour on our manicured toes. Although it was already past his bedtime (he goes to work at the ungodly hour of 6:00 am), he grabbed a flashlight and trekked out to the backyard to investigate the trap. Apparently the “trap” is the lovely place where all the household drains come together, then uniformly flow toward the city sewage line. The trap is kind of like happy hour at a bar where tramps and sleaze balls meet and at closing time make a beeline to the community fleabag hotel. And like that very busy, very sleazy bar, this trap was packed solid.

The next day I checked Angie’s List and found New-Pipe Plumbing & Rooter, the same business that installed our new copper plumbing six years ago. They also donated a gift certificate to the Colfax Charter Elementary School Silent Auction that I worked on last year, so I figured it was good karma to throw a little business their way.

Benny the Plumber ran a camera through the pipe, and my husband watched as roots attacked it like the Whomping Willow tree in the Harry Potter series.  We also had a seam where roots had shifted one of the adjoining pipes halfway downward, leaving a gaping root-filled hole and half the volume available for sewage drainage. Benny gave us three options:

2. Repair the broken section of the cracked pipe for $1723

It would be hard to come up with $714, nearly impossible to scrape together $1723, and we would be dreaming in La La Land to think we could afford the price of a used automobile. I told the plumber we’d do the $1723 fix. He politely advised me that he would be happy to do it, but because our home and pipes are 82 years old, that we’ll eventually be calling him again for the same fix on another section of pipe.

I contemplated crying. Then he reminded me that Angie’s List gave me a 10% discount, and that I would get another 10% discount for being part of the Colfax family. If we could do the major fix it would only cost $4,000.

The cost was still impossible.

And then I looked up at our brand new roof. That was impossible too, and yet we were spending a winter without a tarp over our heads and buckets throughout the house. How did we pay for that when our savings was nil? (You can read about that little adventure in my blog “Raising (the Cash for) My Debt Ceiling”).

I pulled out one of the dozen or so offers we get each month as a reward for our good credit score. I found the one that advertised 0% until May 2013 with just a 3% fee.

I wrote the check. The plumbers came minutes later with their trenchless pipe-laying equipment and hardworking shovelers who obviously don’t need to spent their off-hours at the gym. And by nightfall, we were granted a 101-year warranty and got the A-OK to drain our human pipes into the new buried pipe. 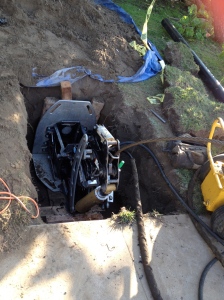 Today I can run the dishwasher or the washing machine, turn on the faucets to the tub, shower, and kitchen and bathrooms sinks, and flush a toilet filled with the aftermath of the most humongous Thanksgiving meal, and rest assured that the remnants will not be making a reappearance up another drain like some verminous whack a mole game.

As for the money… the 0% $11,700 roof bill will start charging 15.99% interest in April. We’ve managed to pay off some of the balance, but the bulk of it will come from yet another 0% interest credit card and this year’s tax refund. That refund amount is sizable due to our insanely large mortgage payment.

Just another example of pride of ownership.