Monopoly’s Iron Gets Burned By a Kitten 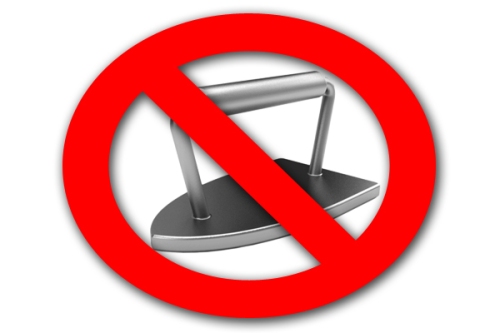 This week, the 78-year old game of Monopoly retired its iron game piece, replacing it with a cat.

From January 8th through February 5th of this year, Monopoly’s Facebook page held a “Save Your Token” contest to choose the game piece that would be retired and the token that would replace it. Apparently a tool manufacturer and Zappos raged campaigns to protect the potentially endangered wheelbarrow and boot, but no sweatshops spoke up for the antiquated 18th century iron. The remaining pieces include the thimble, the race car, the Scottie dog, the battleship and the top hat.

Do you see a theme with these tokens? Neither do I.

I have a bone to pick about the Monopoly tokens. As much as my siblings and I used to fight about who gets the dog or the race car, there really is no rhyme or reason as to what these pewter shapes have to do with buying hotels, mortgaging houses, or getting financially wiped out just by landing in the wrong neighborhood.

So you would think if Parker Brothers was making the effort to change the pieces, they’d choose ones that had something to do with vacation spots, refis, or evil landlords.

The runners-up for the new game pieces included a guitar, a diamond ring, a helicopter, and a robot.

The helicopter would have been consistent with the race car and battleship modes of transportation, but it’s still a bit of a stretch for a vacationing theme. 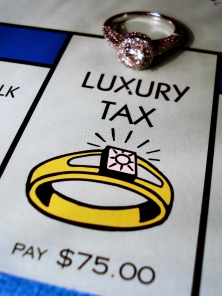 The diamond ring would have been a bit redundant since Monopoly already features a picture of a diamond ring on its Luxury Tax space. And for this 1934 board game, a robot is completely incongruous. The robot might be more comfortable in a 1960’s era game like Battleship, which would be the appropriate place to send both the robot and the battleship.

I’m not surprised the cat won the honor of newest game piece. I’m picturing millions of spinsters with their apartments full of cats spending endless hours playing Monopoly with other spinster cat lovers, writing fan mail to Parker Brothers and pressing the “Like” button multiple times on Facebook as they begged for the Monopoly moguls to ditch one of the original game pieces in favor of their precious Fluffy or Snowball.

But Monopoly already had a dog. And now there’s a cat. The game is moving further away from a hotel stay and closer to a trip on Noah’s Ark. Before you know it, they’ll have Facebook competitions with fans voting for alligators, baboons, and giant anacondas – all critters you’d rather not see when you check into your room in Marvin Gardens.

It’s ironic that Parker Brothers is retiring the iron, since that seems to be the most practical piece you would find in one of Monopoly’s hotels. Would someone really pay a whopping $400 to check into Boardwalk and ask the concierge for a thimble? Obviously someone who can afford that kind of cash during the Depression could certainly pay someone to hem a pair of trousers.

Would they ever have use for a wheelbarrow? Not unless they’re checking into Park Place to have an affair with the groundskeeper.

If the great minds behind Monopoly actually put some thought into it, they’d keep the iron and expand the array of playing pieces to include other items you would ordinarily see in a

hotel. Perhaps a bed. It could double up as a piece of furniture for Barbie’s Dream House whenever Barbie has dwarves or elves as houseguests.

Maybe Monopoly could create one of those hotel desks that offers a complimentary pen and pad of insignia paper. After all, a desk has four legs and therefore would be a good sprinter in case a player drew the card: “Go to jail. Go directly to jail. Do not pass go. Do not collect $200.”

My Monopoly game would also have a Gideon Bible game token. It would be a good piece to have if you are suffering from mixed emotions because your loved one landed on one of your hotels and doesn’t have enough cash to pay up. You’re not an evil landlord. You just have land and the Lord.

Although a nice flat screen tv might be a common item in some of the more affluent hotels in the Monopoly green and blue colored neighborhoods, its thin rectangular shape might be awkward to maneuver around the board. I would suggest an old fashioned box-like tv, complete with rabbit ears. It’s probably the current model you’d find in some of the no-tell motels you’d find when landing on the $2 a night spot on Mediterranean Avenue.

The final Monopoly game piece I would add for my travels from hotel to hotel would be a suitcase. It would be large enough to take home all the complimentary hotel shampoos, soaps, shower cap, and bath towels.

I was just kidding about the bath towels. Kind of.

Be prepared for the next Facebook contest to remove one of the Chance cards in favor of the this updated instruction: