I’ve been hacked. Granted, it’s not as devastating as being hacked up by some Charles Manson-like maniac, but it still makes me fall to pieces.

Some worm of an individual slithered into my iMac and stole possibly all of the 679 email addresses in my list of contacts, including my ex-husband, doctors I no longer see, parents of the children in my 15-year old daughter’s preschool class, and even the emails of my nephew, my Godmother, and my cousin’s daughter who have passed away, but I don’t have the heart to delete them yet.

I found out that my contacts had been infiltrated when I saw that within five minutes I had apparently sent out enough emails to garner 24 failure notices. And these were just the ones that hadn’t been sent. 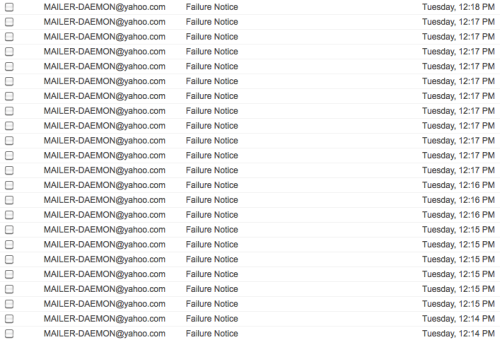 Apparently all my friends (and of course contacts that weren’t necessarily friends) were sent an email reputedly by me. The subject line was RE or — and greetings included Hey, thanks for your wishes!, How are you feeling today?, and hello dear friend among others with poor grammar, punctuation and spelling. Each email provided a link that started with words like green, jewelry, infotech, and the oddest one: maninamall. This variety of links all led to the same website, supposedly called Consumer Career Trends. This site features a bogus-looking news article entitled “Work at Home Mum Makes $10,397/Month Part-Time” which basically upsells a scam called the Home Cash System. I feel a little slimy even talking about it in my blog because I don’t want to promote it. Even negative advertising is still advertising.  But if you ever mistakenly land on this site, leave immediately.

Easier said than done. If by some tragic chance the recipients click on the link and try to exit, they are given an official-looking four paragraph message:

If they click the OK button, they are given a second message which asks:

I doubt you get these cryptic messages from ebay or Amazon.com. My guess is that the same slimy worm who infiltrated my list is trying to buy as much time as possible to gain access into my friends’ contact files.

The hackers are getting smarter. They used to leave the subject line blank, but now they often write a topic that’s worthy of clickage. My counterfeit email even had a little saying at the end which initially looked like words of wisdom from Mahatma Gandhi or Jesus or Homer Simpson. But it turned out to be a random sentence, which after some investigation I found was from a book entitled Radio Boys Cronies, available for free on the Internet through Project Gutenberg. Talk about random.

I feel so violated, and yet this kind of thing happens all the time these days. I receive an email like this about once a week – usually from somebody I haven’t heard from in years.  It’s a nuisance, but we tolerate it.

This got me thinking about what would happen if instead of a virtual hacker job, the perpetrators sent out a real one. This is what it might look like (Sorry for the inaccurate formatting. I can’t figure out margins in WordPress):

(The DOORBELL RINGS. Cathy’s friend LISA opens the door to a BEARDED MAN (HACKER) with a name tag that reads “CATHY FLYNN.”)

I knew I should have let my hair grow out!

I am your friend Cathy Flynn.

I’m Cathy’s friend and I would know if she had a sex change operation. And if she did, she definitely wouldn’t grow a beard.

English is Cathy’s first language. It doesn’t sound like it’s yours.

Let us get down to business.

Ahhhh! It burns! I knew I shouldn’t have taken anything from you!

(Lisa’s hand turns red. Red creeps up her arm and through the rest of her body. Then a HUNDRED RED STREAKS RACE out of her body and into the back doors of all the neighbors in her community. SCREAMS pour from all the homes.)

This be my closing: “One small step for man. Oh giant limb for man’s kind.”

That sounds a little pornographic.

This be good. Link from you to your friends be for Viagra.

(The Hacker strolls down the porch steps and heads for the next home.)