On Mondays and Wednesdays from 1:00 to 2:00, a handful of moms at our local elementary school volunteer to help some of the 1st graders who are struggling with sight words. For those of you who have been reading English for a while (probably most of you unless Siri’s dictating all your messages) and who are unfamiliar with the term sight words, it means those words that you can’t really sound out but have to memorize. Most readers don’t often stop to think that of should sound like off instead of uv, that is ends with a z sound instead of a snake hiss, and said is pronounced sed instead of some strange double-syllabled word that takes hapless non-readers a good 30 seconds to try and sound out. 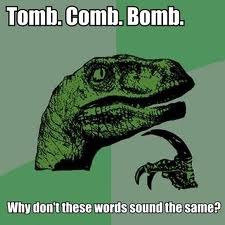 Three of the 1st grade sight words are though, thought and through. I still have no idea how to explain to these frustrated 6-year olds that ough from each of these words makes the long O, short O and double O sounds respectively. And while I’m trying, it would certainly not be the time to go off on a tangent and explain to them that respectively does not mean polite.

My 16-year old Emily (she calls herself Djaq and pronounces is Jack – I’ll explain more in a future blog) just performed in her high school’s production of “The 25th Annual Putnum County Spelling Bee.” She played Olive, an elementary school student whose only friend is her dictionary, which she reads voraciously while on the toilet. Olive muses that if you take the W from answer, the H from ghost, the second A from aardvark, and the T from listen, you get… 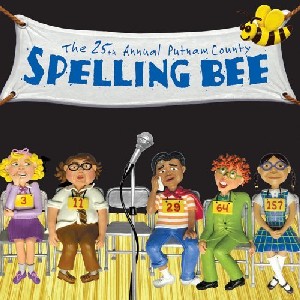 Emily/Djaq recently recounted an example that she learned from her eclectic 3rd grade teacher Mr. Schultz (quoting from George Bernard Shaw). If you take the GH from laugh, the O from women, and the TI from initiate, you get the word ghoti. However, it is pronounced fish. No kidding.

If a word starts with a C, it is pronounced K or S. Why? Why did the English connoisseurs even invent a C if it doesn’t have its own sound? Why does G make either the G or J sound when there already is a J? Why is there an X when it actually blends KS, yet it is pronounced Z in nearly every English word with the exception of x-ray?  Why did they invent a Q when it really is just a K blended with a long U? And to make it even more inconvenient, there’s almost always a U piggybacking on Q like a lazy parasite.

We teach these baffled children that an E at the end of a word is silent and it makes the previous vowel long (as in my son Jake’s name). Like all the other rules of English, this one sounds stupid too, but at least it seems like a somewhat consistent rule. That is, until they get to middle school and based on the silent E rule, they try to pronounce their new vocabulary words epitome and calliope. Oops. Not just an E at the end, but a really long E.

I took two years of Spanish in high school and all the English pronunciation rules I learned during my previous 10 years of education were thrown out the window. Yet once I learned that J makes the H sound and the vowels A, E, I, O and U are pronounced short O, long A, long E, long O, and double O, I found that Spanish doesn’t often break its own pronunciation rules. Jose will not and never will be pronounced Joe’s (unless you meet him in art school). Instead, it’s hose-ay, which written as a pronunciation looks as gringo as Doris Day.

I think the easiest and smartest solution to the English language dilemma would be to throw out the spelling of all traditional English words and instead spell them with the same pronunciation key used in the dictionary. Of course adding all these long and short vowel sounds, CH, SH and the hard and soft TH, not to mention the accents and the syllable breaks, would make the English alphabet a little bit bigger. Everyone will have to grow their fingernails and file them to a sharp point in order to use the teeny tiny keys on their Smartphones to type:

Then there’s the schwa (ə), which would probably be the most popular letter in the English language. It sounds like uh, and it is also the most widely used sound these 1st graders make when they’re trying to sound out a word:

Dictionary.com calls ə “the mid-central, neutral vowel sound… of a in alone and sofa, e in system, i in easily, o in gallop, u in circus.”

Speaking of circus, you have your full meal of English language funkiness with C sounding like K, C sounding like S, an actual S, a schwa (ə), and even one of those funky colon on its side things whenever an R takes a vowel hostage. Here’s how Dictionary.com, Merriam-Webster, American Heritage, Oxford, Collins, and MacMillan each show their pronunciations of circus: