There’s an urban legend that Sav-On Drug Stores (now CVS) changed their name to Osco, then just as quickly changed it back to Sav-On when they realized that asco in Spanish (pronounced oskoh) means disgusting, nauseous and filthy. Snopes and Wikipedia claim that the rumor wasn’t true, but it’s a good place to start my:

1. Smart & Final: I agree it was smart to shop there before they started raising their prices a couple of years ago, but what do they mean by final? If that ten-pound bag of spuds turns out to by moldy before I get it home will they refuse to exchange it? What if I find rat turds in my Cocoa Pebbles or a booger in my relish? They’re really going to tell me to get a lawyer rather than refund my three bucks?

2. Quiznos: I can understand why Subway came up with its name since it sells subway AKA submarine sandwiches. Quiznos also sells submarine sandwiches but their name sounds like a failed SAT test. It’s not even Quizknows or Quizyes, which might be slightly more favorable, but it still has nothing to do with sandwiches. Maybe the quiz is trying to figure out how many fewer carbs you’ll have to burn by ordering their flat bread. 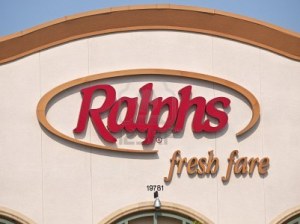 3. Ralphs: Supermarkets are often named after their founders and called by either their first name (Jon’s), last name (Vons, Albertsons, Smiths) or even both names (Fred Meyer). It seems logical that Ralphs was founded by someone named Ralph, but he really should have called his store by another name. Ralph is a slang term for throw up, or vomit, as in: I wandered around Ralph’s meat aisle and it made me want to ralph. Unless you’re bulimic, it’s really not the best name when shopping for food. 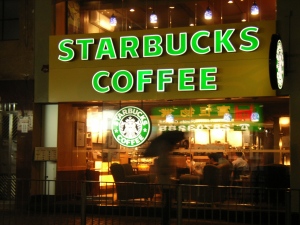 4. Starbucks: It’s now a household name, synonymous with coffee the way Kleenex is with bathroom tissue. They’re more ubiquitous than public restrooms, and in fact, Starbucks probably have the only public restrooms that people are actually welcome to use. The name breaks down to star and bucks, which is no surprise since every supermarket tabloid features a celebrity popping in there for a half cap or Frappuccino and paying about ten times more than if they had made it at home. By in there, I assume you know I mean Starbucks, and not the Starbucks restroom. There’s a whole different aisle of magazines for those celebrity photos.

5. Kmart: Mart is a place where people come together to buy and sell goods, but what’s going on with the K? Is it short for OK? If so, do you really want to shop at a store that is just ok? If they wanted to keep it short, I could see AAA Mart, but that might be mistaken for either AAA insurance, or one A more drunk than Alcoholics Anonymous. The founder’s name probably started with the letter K, just as the founder of Walmart’s name probably starts with Walking Away From American Manufacturing Jobs.

6. Robinsons-May: When I heard that May Company was merging with Robinson’s, it seemed like the obvious choice for the new name would be May Robinson. There might have even been some real May Robinsons out there who could have participated in the ribbon cutting ceremony. But instead, it became a backwards mouthful, like some formal roll call as in: Flynn, Cathy. It would be like Wienerschnitzel merging with Carl’s Jr. and calling itself Wienerschnitzel Carl instead of Carl Wienerschnitzel. The backwards name was short lived, and now replaced by Macy’s, which can be used as a first (Macy Gray) or last name (William H. Macy). A coincidence? I don’t think so.

7. Jack in the Box: What the flock does this antiquated toy have to do with fast food? You crank a handle on a small box while an annoying tune plays for about ten seconds, then out pops a wiggly clown. It gives small children nightmares and elderly adults a heart attack. Do the great minds at Jack in the Box Corporate realize that jack is another word for nothing? Do you really want to get stuck in that long drive thru line just to get jack (nothing) in your box? Don’t even get me started on the urban slang term for box.

8. Big Lots: This store, which is one step up from a swap meet, used to be called Pic ‘N’ Save (another ridiculous store name). The establishments are not big. If they were, they would be called Costco. I assume that they use the word lot as in a portion of something rather than lots as in a heap of stuff. Even with a valid entomological explanation, Big Lots still sounds like loads of large as translated by one of those scam emailers whose first language is definitely not English.

9. Forever 21: How many of you really want to be stuck on 21 for the rest of your lives? You’re finally able to get legally s#$tfaced and lose your paycheck on the roulette wheel. Are these your truly memorable moments? Frankly, whenever I go into Forever 21, the only customers I see are the tweens and their moms, and they’ve already been around that 21-year old block twice. It’s a little sad when you see those mothers getting a thing or two for themselves as well, wondering if they should instead use the money for that second face lift, another botox session, or to have a couple of ribs removed.

10. McDonald’s: As the most famous franchise until that expensive celebrity coffee took the world by storm, everyone knows your food is from the land of the Golden Arches as long as you tack Mc on the front (McNuggets, McMuffin, McRib, McFlurry). Yet it doesn’t seem to have much in common with the other famous McDonald, as in ee-i-ee-i-oh! – particularly since their fast food hardens the arteries so quickly there’s no way the farmer would ever reach old age by eating it. I know some of you will try to point out that the elderly agriculturalist spells his name MacDonald, but it all sounds the same if you’re singing it. When your kids are eagerly chanting “and a moo moo here” or a “cluck cluck there,” you can tell them that their Happy Meal gives them two treats for their mouth – an entertaining song, as well as a cheap, tasty and terribly unhealthy meal. Fortunately, there’s very little actual meat in McDonald’s food, so it’s almost like your tyke is eating vegetarian.

These are my top 10. Can you suggest any others? Or was my list so crass that you need to race for the nearest Osco because you’re feeling a little asco?